Are you planning a trip to Tbilisi and looking for tips on moving around the city? Let us help you out. In this post we set together all the information we think might help you choose the best way of getting to know Tbilisi.

Getting from/to the Tbilisi airport

International Shota Rustaveli Tbilisi airport is located about 17 km away from the city. And even though we have been picked up by a private driver there are also other options of getting to your accommodation.

Bus 37 is probably the cheapest way for transferring to the city. Note, that the bus doesn’t go to the city center, the last stop is Station Square – from there you will need to take the underground or another bus/taxi.

The bus ride takes about an hour and buses depart every 15 minutes (day schedule) and 30-35 minutes (night schedule) in front of the departure hall. It goes 7 days per week with no night break. One-way ride costs 50 tetri (about 0.15 Euro), but you will need to pay with coins – no credit cards accepted, so it’s better to prepare the coin in advance.

Hotel Pick-up is probably the easiest and fastest way to reach your destination. If you want to start your acquaintance with Tbilisi stress-free, simply ask your hotel to send you a driver or pick a taxi from the airport.

One-way ride in a basic taxi will cost you about 20-25 Euro.

Keep reading (next paragraph) if you prefer taking a regular taxi, not the hotel-pick up. Regular taxi costs about 10-15 Euro.

There is also a third option – a recently opened train line which will bring you to the Station Square, from where you will need to to take the underground or another bus/taxi.

The train ride takes 40 minutes and costs 50 tetri. The downside of the train is that it runs only two times daily at:

Please check the accurate schedule before your departure!

Moving Around Tbilisi in Taxi

Georgia is considered to be a safe country and from what we have experienced people are open and friendly to foreigners. Thus there is no trouble, except for the environmental one for moving around Tbilisi in a taxi.

Taxi in general is a very popular way for moving around Tbilisi and around Georgia.

There are two types of taxi in Tbilisi: private cars and regular taxi

For example, private taxi is usually a private car with a driver.
It is very popular to rent taxi for the out-of town excursions. Sometimes taxi is the only option to reach a place, like the Chronicles of Georgia.

How to get a taxi:

Private taxi drivers offer their services at the airport arrival hall as well as around the town. Similarly, hotels will also have contacts of private drivers.

regular taxi drive by meter, private ones run by bargain. You can offer your price and discuss it with a driver – usually there is no tricking or cheating.

A trip to/from the airport will costs you about 30 GEL.

The price usually depends on drivers skills (English language) and the car brand/condition. A private taxi for a day in Tbilisi would cost you around 200 GEL per car.

If you prefer staying digital and don‘t feel like bargaining, there are some taxi apps similar to Uber which will help you out. Uber doesn’t work in Georgia.

We have used Yandex taxi, since we were familiar with it from the times of traveling in Russia. Therefore it was easy and convenient to use, except for one time when our driver felt like driving without navigation system and instead of 5 minutes it took us 20 minutes. But this could happen anywhere.

Have a look the post by Megan and Aram to learn about 2 useful apps you can use when ordering a taxi in Tbilisi.

Moving Around Tbilisi by foot

Walking is our favorite way of moving  around and we chose walking as the main way of  exploring Tbilisi.

With over a Million inhabitants, Tbilisi is large city which spreads along the Mtkvari river. The walk between districts can easily take an hour or more.

The old part of the city and the sightseeing points are located within one area, making them relatively easy to navigate.

Old city is worth it‘s time. But the new and evolving areas are also a great way to meet the modern side of Georgia.
Every day we chose an area we wanted to explore and stayed within it’s borders.
We‘d  suggest you do the same and divide Tbilisi into districts, visiting them one after another, not to overwhelm yourself.

Note that Tbilisi is hilly. The highest mountain, Mount Mtatsminda is 770m high.

Saying this, please be sure to pack comfortable shoes.

Before you board any public transport you need to obtain a Metromoneycard – a universal way of payment for moving around the city. The card costs 2 GEL (0.60 Euro) and you charge it with the desired amount of money for the future rides.

We haven’t taken neither bus nor marshrutka, prefer moving around Tbilisi on foot. You see a lot of small yellow buses (marshrutka’s) driving around the city. They usually go similar routes as buses, but you can request the stop at your convenience.

Buses are the same as everywhere in the world and you can check their operating times and routes over here. Bus stops only at they intended stops.

Underground in Tbilisi has only two lines, but they connect the most important areas of the city.

The underground itself has been built during the Soviet times and it looks very similar to the ones in St-Petersburg and Moscow, but without any posh decorations.

The underground runs from 06 a.m. and stops at midnight.

Aerial Cable Car connects Narikala Fortress with Ride Park. We can recommend taking it alone for the incredible views over the old part of the city. The only disadvantage is that the cable car moves way too fast.

You can use Metromoney card for paying the ride.

Funicular is another great way to connect the busy city with the Mtsaminda amusement park. The park itself is not special, but the views from up there are breathtaking!

The ride costs 2.5 GEL and you can get the ticket at the ticket office at the entrance to the funicular.

More about Georgia: 48 hours in kutaisi – things to see and do in the georgian city of smile 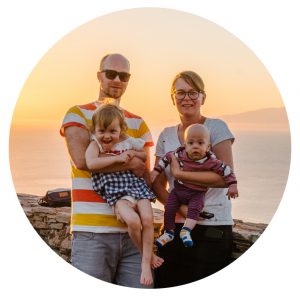 Hey there,
we are Alexandra and Florian,

on Shurupchik Family Travel we share our adventure stories, travel tips and photography from around the globe together with our 2 kids.

Our goal is to motivate you to explore the world with your little ones.
Read our story